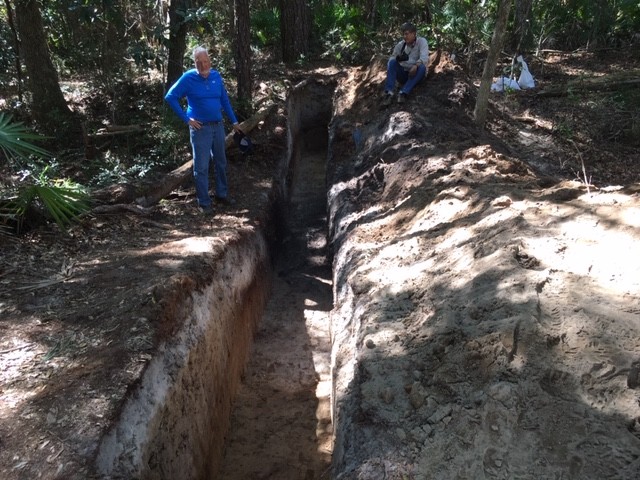 That’s how archeologists describe the prehistoric canal that links Oyster Bay and Little Lagoon built thousands of years ago by Native Americans.

The 8 foot deep, 30 feet wide, half mile long canal was hand-dug by those early people only after they cleared the Earth of its thick forest – all without the use of modern tools. Early carbon dating results put their Herculean effort some 1,400 years ago.

Historians believe the natives used the canal seasonally, to move supplies between the two bodies of water. But at some point a large storm filled the canal with massive amounts of sand. Nature grew into and over the canal.

Still, it was there. And somewhere in the region’s collective memory, everyone knew what it was.

If you grew up on the island your grandparents probably told you about the so-called Indian ditch. You may have played in the large curved crevice or stood atop one of the 10 mounds that line the area.

Harry King remembers following his grandparents into their garden in central Alabama and finding “pretty rocks.” His older cousin said they were arrowheads and promptly relieved the tot of his treasures.

King never stopped thinking about his finds. His curiosity helped kick start a life-long interest in history and dedication to preserving Native American stories. As a charter member of the Smithsonian Institute’s National Museum of the American Indian, King said he wanted to contribute.

A move to Fort Morgan Road would finally give him the chance – in a historic and monumental way.

Nearly 27 years ago King relocated from Pensacola Beach to Fort Morgan. A roadside sign marked “Indian Canal” piqued his interest and he began asking questions, just a few at first.

Everybody knew it was there, but nobody quite knew why, where or how. It simply was.

Still, King asked, and searched, and asked some more. Three years ago, he stumbled upon his answer, almost literally.

Many of the dirt roads along Fort Morgan Road are privately owned. Their spirited owners make it a point to keep strangers away. After befriending an elderly lady named Pat Roberts, she took him down her road, shuffling with cane in hand, and showed him the very thing he had been searching nearly two decades for: the canal, in nearly pristine condition.

“It was as big as a room,” he exclaims at the memory. “Some people didn’t believe the Indians could do this, but seeing is believing.”

King would soon learn that had it not been for prickly neighbors and government red tape, the canal might have been shoved aside by modern machinery and tucked away only in the memory of the skies that remain above it.

In 1827 young Lt. Burch of the U.S. Army’s Quartermaster Corps was sent to the Gulf of Mexico to scope out the best location to create a water route linking the upper Gulf Coast to Florida.

As Burch assessed the landscape he found the canal.  He drew maps. He wrote a report and he attached a $10,000 price tag to the project which would roll directly over that already dug out canal.

Burch returned to Congress and the project was buried in bureaucracy. In 1834 more routes were drawn and the ancient canal was saved from destruction.

But, the young lieutenant’s findings gave King one of his first hard pieces of evidence. Vonnie Zullo, a professional researcher, spent three days in Maryland digging through stacks of public records to find the map Burch had drawn of the area.

Otherwise, there was no official mention of it, anywhere.

“There is no record of it in any of the early Spanish or French recordings or even during the Civil War,” said Howard J. Cyr, former director of the Archaeological and Environmental Research Laboratory, Department of Anthropology at the University of Tennessee-Knoxville. “It’s crazy it’s just hidden out there.”

Cyr said archeologists have found similar canal systems in Florida but only one in as pristine condition as this. Officials believe that native tribes used the waterways as a sort of freeway system to make travel through dense vegetation easier.

Knowing why they did it may be easier than determining how.

Gregory A. Waselkov, professor emeritus of anthropology at the University of South Alabama, has been working with King to uncover the mystery. He said digging wasn’t an issue since the dry sandy soil is relatively light. The thick trees, however, were not.

“The biggest obstacle we run into is tree stumps and roots. How could they have done this without chain saws and that sort of thing?” he said.

Experts believe the Indians burned the region over and over until the trees and their stumps were nearly gone.

“When we dug the canal, underneath that berm there was charcoal that was probably a residue from when they cleared the area,” Waselkov said, adding that at first, he didn’t believe what he thought he was seeing.

“I was kind of skeptical. It was in such good condition and on such a large scale. The fact that it is built in sandy soil makes it even harder to believe,” he said.

“The more we dug into it, the more we began to appreciate that it was quite old and the sand was kind of unusual,” Waselkov said. “The people who built this really understood engineering on a different level. They could build above sea level and still have water flowing. It’s all kind of extraordinary. We’re really thrilled about it.”

The team turned to radiocarbon dating to determine a relative age, using samples taken from the bottom of the canal and the bottom of a nearby mound they believe was built by the same people.

Radiocarbon dating works by comparing three different isotopes of carbon. Decay of the radioactive isotope Carbon 14 can be used as a sort of clock since its rate of decay is not affected by temperature, water and other shifting conditions. By measuring the rate of decay, scientists can calculate a range of time that has passed.

Soil samples collected from buried soil along the bottom of the canal are believed to date from AD 566 – 654, about 600 years after the birth of Jesus.

But, who built it?

Waselkov said we may never know except to attribute the engineering feat to the Middle Woodland Period of Native American history.

“It’s so far back in time that we don’t have a way to really link them to modern Indians in the area,” Waselkov said. “People moved and especially in the early Colonial era, there was a lot of disruption of Native American people by explorers and settlers. Tribes fled. It was a chaotic situation.

“It’s difficult to go from modern day tribes and say this is one or another’s ancestral people who built this,” he said.

Those who did build it didn’t leave many clues behind. There are few relics in the canal or nearby, save for sherds of beautiful pottery decorated with hand crafted etchings and paintings. A settlement adjacent to the canal is home to a mound that was rumored to hold human remains. In truth they are nothing more than ancient trash heaps, full of fish bones and shells.

“We think they were opening the clams and oysters and shellfish there and processing and drying the meat to transport,” Waselkov said. “There is a lot of evidence of cooking and processing.”

A half-mile long canal, built by people nearly 1,400 years ago without even a shovel to help them? While the archeological community holds its breath as they wait for each carbon dating result, skeptics shake their heads.

“Some people can’t be convinced,” Waselkov said. “When I talk about stuff like this the general feeling among some people is that the past wasn’t important. It requires some belief on the part of modern people that it’s interesting to see how people used the landscape we’re living in.”

Cyr works in a sub-discipline of archeology called geoarcheology which means he examines the changes to the environment and the landscape to trace what happened and how.  There is an assumption that regions look the same over time but storms, flooding and human activity can make a location look completely different over the course of just a few decades.

“The first thing we do is look at it and say, is this a natural feature or is this an anthropogenic feature? Is it something people did? We did a survey looking at smaller topographic changes in that area and that canal shows up like a scar,” Cyr said. “It’s a pretty unique feature on the landscape.”

The nearby shell mound gives the site archeological context.

“This canal presumably would have went right by the shell mound so that sort of spatial relationship is really helpful,” he said.

Cyr’s work was paid for by the City of Gulf Shores, a rare treat he said since often municipalities only begrudgingly pay for archeological work when historians fear the city is about to bulldoze over an important site.

“Kudos to Gulf Shores, they have been amazing,” Cyr said. “The amount of work we did wasn’t major, it was just enough to answer a few questions. These things are really intriguing and fit well within a walking tour or the city’s greater tourism plan.”

Developers might see the ancient site as prime real estate but for King and others, it is a key to understanding our past and our future. Cyr said the layers of soil that have moved above the canal can help us understand climate and how the environment has changed and will change.

There is also the anthropological importance, he said.

“This allows us to ask more questions about how people were interacting with the environment and the amount of change they were able to do to the environment to make their life a little bit easier,” Cyr said.

For King, he has been able to talk legions of dedicated volunteers into spending hot weekend days digging in the canal, collecting samples and submitting stacks of paperwork to officials at universities, the Smithsonian and National Geographic.

He dreams of eventually seeing one piece of the site that measures roughly 150 feet long, currently on land owned by the city of Gulf Shores, linked to the walking trail with the excavation open and interpreted for visitors. He hopes that accomplishments of the tribes who built it will be recognized by national organizations.

And he’s not alone.

“We have the ability to destroy pretty much anything these days,” Waselkov said. “Now we have this really rare, ancient feature on our landscape. It’s made it this far, why should we be the ones to destroy it?”