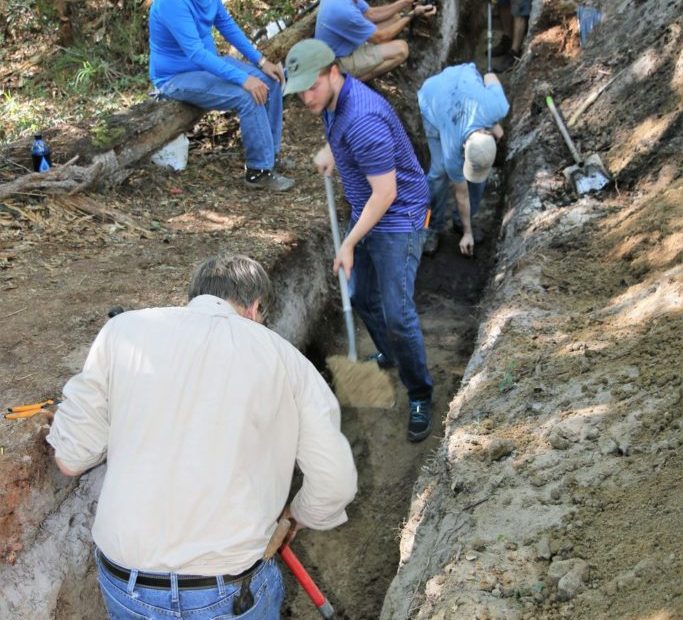 Working on tips from locals, archaeologist’s announced the discovery of an ancient canal cut through the sandy soil of the Fort Morgan peninsula 1400 years ago. 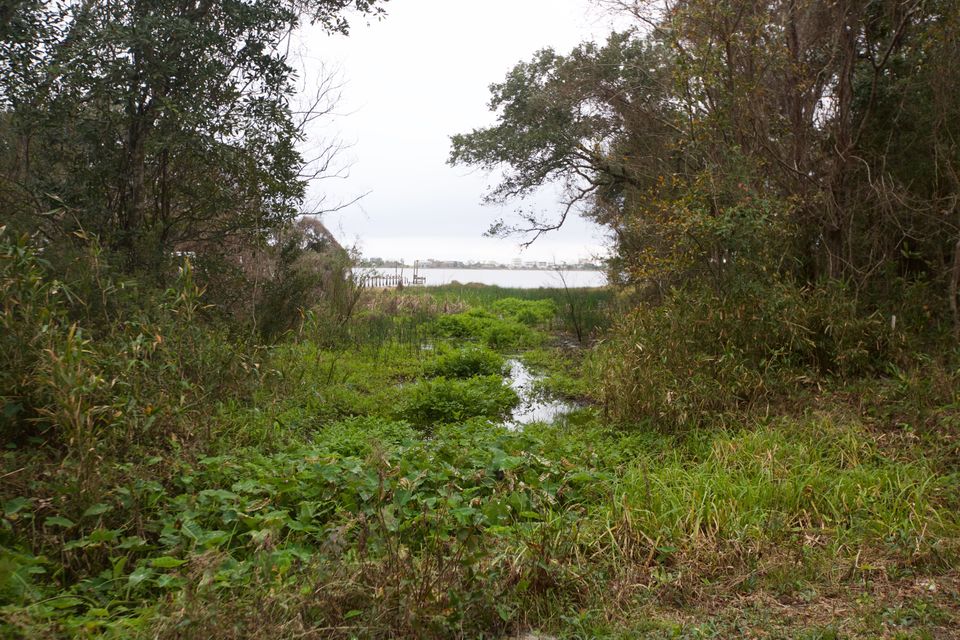 The canal, dug in 600 AD. once ran south from Oyster Bay to the northern shore of Little Lagoon in Gulf Shores.

It would have served as a sort of prehistoric super highway, facilitating travel by dugout canoe from Mobile Bay to the Gulf of Mexico.

The canal is 6 tenths of a mile, making it one of the longest pre Columbian canals found in North America said Greg Waselkov, head of the archaeology department at the University of South Alabama. Waselkov led the recent excavation of the canal in a forested area near Little Lagoon.

“There are other similar ancient canal’s, but they are very rare. All of the other long canals, and there are only 6 known examples of this type, are all in Florida,” Waselkov said. “The Gulf Shores canal is one of the best preserved ancient canal. There are many short canals discovered at coastal sites, but long ones like the Gulf Shores example, which ran for a kilometer or more are quite rare.”

Waselkov said that one of the Florida canals was in the panhandle area, but the others were in the Everglades and south Florida, making the Gulf Shores canal an important discovery for the northern Gulf Coast.

“The only other ancient canals I know of in North America are the Hohokam irrigation canals in Arizona, which are similar in appearance and scale and very extensive, but very different in terms of functions and hydrology,” Waselkov said.

The Gulf Shores canal was certainly not created for irrigations, given that it sits in the middle of one of the rainiest spots in the U.S.

Instead, it was created as a conveyance, during an era known as the Middle Woodland period.

It appears the canal was about 30 feet wide and 6 feet deep. The 2 bodies of water it connected, Oyster Bay and Little Lagoon, would both have been rich fishing grounds in 600 AD, full of oysters, crabs, shrimp and fish.

“We have radiocarbon dated the canal to right around AD 600, which in south Alabama corresponds to the end of the Middle Woodland period.

The Bottle Creek site on Mound Island dates to around AD 1250 and later, during the Mississippian period,” Waselkov said, referring to an island in the Mobile Tensaw Delta that features 18 large earthen mound’s. The tallest mound stands 81 feet tall today, 800 years after it was built.

“With our current knowledge, we can not make a straight-line connection between the Native Americans here in AD 600 and later Native American peoples,” Waselkov said. 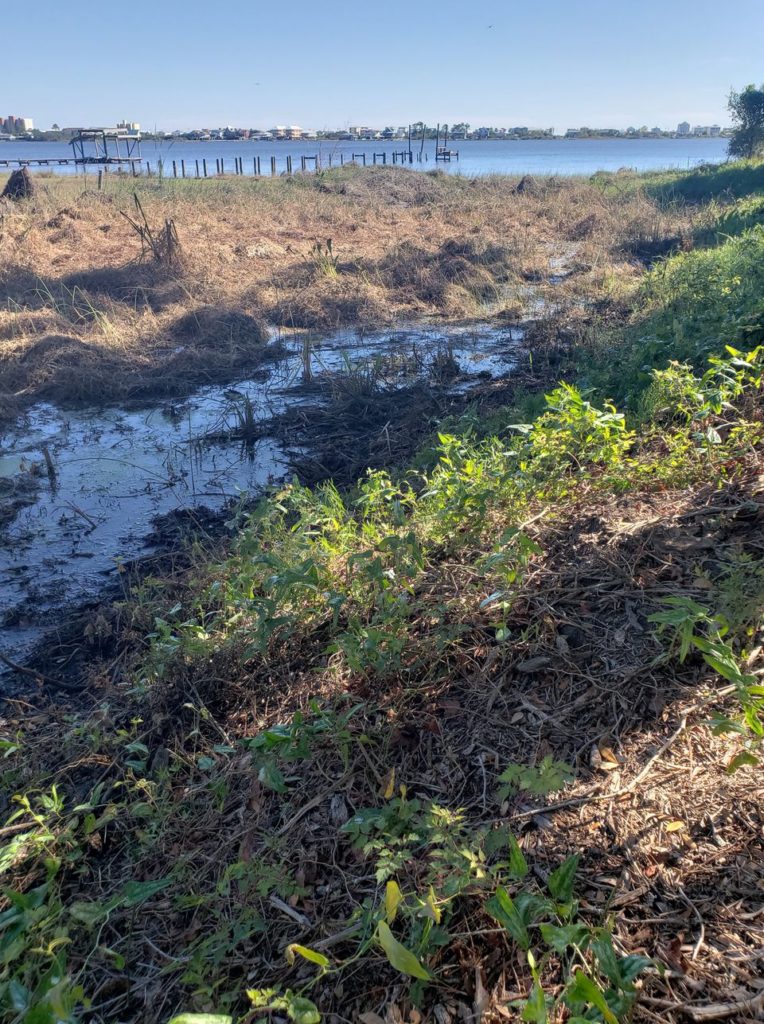 This is the end of the ancient Native American canal, just where it meets Little Lagoon.

“The Middle Woodland period saw a lot of earthwork and mound construction all over eastern North America. The famous Hopewell mounds of the Midwest are best known, but there were similar large earth structures built all over Alabama and elsewhere in the South.”

The Middle Woodland period featured extensive trade networks that connected tribes spread across the U.S. Tribes in the Midwest, for instance, traded metals such as copper and silver.

Tribes near massive obsidian deposits in Oregon traded shards of the volcanic glass, while Gulf Coast tribes traded large shell’s and animal teeth, such as from alligators and sharks.

In that era, one of the easiest ways to travel was by water. That was especially true along the Gulf-Coast, where our forests often form dense jungles. Study a map of the Fort Morgan peninsula and the benefits of this particular canals are quickly apparent. As you look at the map, remember that the Intracoastal Canal did not exists.

Getting from the eastern shore of Mobile Bay to the Gulf without the newly found canal would mean an arduous trip, requiring hours of paddle across the open and often rough waters of the bay. From the mouth of Weeks Bay to the tip of Fort Morgan, for instance, would require a 14 mile paddle across the bay, where 2-foot waves are common. Then imagine making that trip in a hollowed out log with paddles carved from trees.

Connecting Oyster Bay with Little Lagoon, which had an outlet to the Gulf even in prehistoric times, was a brilliant idea. Travelling via the canal would cut the amount of paddling from Week’s Bay to the Gulf by more than ten miles. And much of the journey would occur in calm and protected water, where paddling is both safer and much easier.

Waselkov said that the Middle Woodland era was believed to be relatively peaceful compared to later times, when tribe frequently enslaved those they conquered. While slaves labor was sometimes used for various purposes in those later periods, Waselkov said he did not think that was the case with the canal.

We have no reason to think any of them were built with slave labor, Waselkov said. “People seem to have contributed labor for short period’s during the year to build mounds and earthen enclosures.”

While the benefits of the canal for travel are obvious, it was clearly abandoned at some point and allowed to fill in. Only a few section’s of the canal are apparent today, one where it dumps in to Little Lagoon.

Im still trying to pin down the approximate date when the canal fell out of use. Dating a canal, it turns out, is really quite difficult, because amid its use it would have been cleaned out occasionally, which removed dateable material for us to find,” Waselkov said. “And hurricane tidal surges dumped massive amount of sand onto the abandoned canal, which contains all sorts of dateable material from elsewhere that has nothing to do with the canal. So it is a challenge.”

The archaeologists said that he has been unable to map the route of the entire canal because only 2 sections remain visible, both near Little Lagoon.

“The City of Gulf Shores owns the southern terminus and is developing plans for long term preservation and public interpretation, which is a wonderful outcome of our project,” Waselkov said.

“Locating the northern half of the canal, where it entered Oyster Bay will probably require some remote sensing survey, such as the use of ground penetrating radar, which we have not tried yet. That is part of our long-range plan.”

Moving through the dense forest that the canal once traversed, trying to escape the tangling vines and various thorny shrubs of south Alabama, the benefits of such a canal are obvious. Those benefit are doubled when you imagine trying to carry a day’s harvest of oyster’s, crabs or fish back to your family.

Standing on the edge of the canal this week, gazing over the remnants of one of the oldest man made objects on the Gulf Coast, it was easy to understands why those ancient people would have come together for a communal project like this. Simply put, it would have made life much easier, and much more pleasant. What better reason to do anything?

“This project is unusual in its origin’s,” Waselkov said. “Harry King, a resident of Gulf Shores, organized the effort to learn more about the canals and nearby ancient archaeological site.

The entire project has been a volunteer effort, with some crucial funding provided by the city to pay for radiocarbon dating and the expertise of a geo Archaeologist, Howard Cyr from the University of Tennessee.

But the bulk of the work has been done by volunteers. It is a great example of a public archaeology project that has made a valuable contribution to our knowledge of the ancient cultural landscape of coastal Alabama.